This article is written for the 53rd Edition of Carnival of Genealogy. (See previous post.)

When I learned that this edition was the type where you could write about basically anything family history, and especially because this is my first time writing for COG, I was a little overwhelmed by all the possibilities. Where to start?

But, as I went back and read earlier editions of the Carnival of Genealogy, I noticed that one edition was dedicated to the subject of houses in historical research; where our ancestors lived, and what the significance of these homes was. It occurred to me then that this was the perfect subject to introduce COG readers to my research, since houses were what originally brought me into the project of historical research.First off, let me say that I’m not a genealogist in the traditional sense–I’m not related to the people I’m researching. My own ancestors didn’t come from anywhere near this area, weren’t connected at all, and I haven’t even done extensive research on my line–yet I have come to know so much about the local families I’m researching, that it’s ended up very much like genealogy.

When I decided, back in April of 2007, to study local history, I wasn’t sure where to begin at first. Then, after I thought about it a bit, the first conclusion that came to me was to study the houses. I have always been interested in history in general, and I knew that if I found a large and charismatic old home, chances were that there would be an equally charismatic builder somewhere in its past.

It was a home in Edgewood, the suburb of Coal Township (Shamokin’s sister city), which I was first drawn to. I had admired this place for years, so I immediately decided that it was the one I needed to research. Actually, after a long period of confusion which I won’t go into, as it is a very long story, it later turned out that this was the Nagle house (see “Why This One Point in Time?”). But by the time I found this out, I was well into researching the history of the family that had built another house in the same area, which unfortunately no longer stands–and that family was of the old and illustrious name of Kulp. 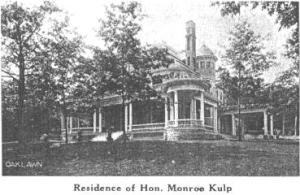 The most common photo of Oaklawn, looking approx. northwest. From the 1964 book, Greater Shamokin Centennial.

Now, I realize it wasn’t so odd that I initially mixed up the two homes. They were actually very similar in architectural design, and practically next door to each other. Both were turn-of-the-century Queen Annes, white with one-story wrap-around verandas, distinguished-looking stone walls, and a doubled column design. The Kulp house, known as Oaklawn, was older, having been built probably shortly after 1900; the exact date is unknown. The Nagle house, according to its current owner, was completed around 1910. As outlined in this site’s explanatory page, both builders, Monroe H. Kulp and Millard F. Nagle, were in the lumber business, and I suspect some kind of rivalry may have been going on between them.

One of the things that confused me early on was a bit of information I received from a trip to County Administration. They told me that according to their records, what I later came to know was the Nagle house had been built by Sarah W. Kulp, widow of Monroe H., in 1922. Besides the fact that the architectural style was entirely not from the 1920’s, it also didn’t make much sense for her to have built another house–especially considering that the early 20’s was the time she sold the Oaklawn mansion to an A.H. Kershner, local automobile dealer. Although I haven’t gone back to County Administration to find out exactly what really happened, I suspect that the clerk may actually have been reading a record of her purchasing the house from Millard F. Nagle. I don’t know that she ever did that, but I do think that Nagle did not spend much time at the house he built. He died in 1928 or so, and was buried in Pottsville, his hometown. Possibly he may have retired there in the later years as well.

Oaklawn was located on Lynn Street, near the entrance to the former Edgewood Park–which, as was the Edgewood suburb itself, was one of the many projects of the energetic and charismatic businessman, Monroe H. Kulp. The original address of the house, according to census and other records, was 1651 W. Arch Street. Why this was, isn’t known, as the house did not directly border on Arch Street, although the street does intersect with Woodlawn Avenue. Later, around 1918-1920, the address was changed to its final and more logical form, 1701 W. Lynn, possibly due to redevelopment of the area. At this time, until the aforesaid sale of the house in the early 1920’s, it was the home of the widow Kulp; her Scottish housemaid by the name of Janet, who was later replaced by Violet (Ritzman) Emerick; and the long-employed Jamaican chauffeur, Josiah A. Simpson.

Although the Nagle house has survived, the former Kulp residence was torn down in the early 1970’s. Barely recognizable are the remaining traces of the wall, which now surround a modern housing development.

Several other houses play an important role in my research. Perhaps one of the oldest was the family homestead on Dewart Street in Shamokin’s 1st Ward. Erected by Kulp’s father Darlington between about 1867 and 1870, this was the family home for decades until the turn of the century. Around the 1920’s, however, it became the site of the Elizabethan-style residence of John H. Glass, a U.S. marshall.

In fact, most of the homes connected with my research, with the exception of the Edgewood houses, were in or very near the 1st Ward. In the late nineteenth century, this was really the center of Shamokin society. Most of the more famous local families lived there at one time, and in those days the primary street of the ward, Sunbury Street, was lined with many imposing structures–residences, apartments, offices, and the occasional well-kept business place. Since I have often researched the genealogy of the Kulp family, I have discovered that not only were the major Shamokin families of the 1st Ward connected by locale, but in fact, most were even distantly related!

McConnell Mansion, looking northeast. The property is now the site of an elderly housing highrise.

Another primary residence of the 1st Ward was the stately, elaborate Victorian known as the McConnell Mansion. From around the 1880’s until his death in 1949, this was the home of William Calder McConnell, brother-in-law of Monroe H. Kulp. Naturally, during his sixty-year residence there, the mansion became commonly known by McConnell’s name, but in fact he was not the original builder. Just who was isn’t known for certain, but in the early 1880’s, his wife’s aunt, Catharine “Aunt Kitty” Martz, owned the home. When the advent of the electric light came to Shamokin in 1882 with the arrival of Thomas Edison (which is one of the most popular stories of Shamokin’s history, as you can imagine!), the mansion was the first home in town to be lighted by electricity. “Aunt Kitty,” however, seems to have been nonetheless a little wary of the new invention, and requested that only her kitchen be wired first.

I do have one theory, however, as to the original owner of the house. Catharine Martz was a niece of William and Reuben Fagely, two early businessmen of Shamokin who, all the stories say, were the dominant local personages in their time. One of them may possibly have built the McConnell Mansion. Catharine Martz is, in fact, frequently mentioned in the will of Reuben Fagely, who died in 1880.

For seven years from the time of her first husband’s passing in 1890, until she remarried, Sarah (McConnell) Detweiler, sister of William C. McConnell and future bride of Monroe H. Kulp, was also a resident of the McConnell Mansion. According to the 1900 census, after they were married she and Kulp took up residence in a brick half-double–also on Sunbury Street, and just a few blocks away from the McConnell Mansion. It was 313 E. Sunbury Street, a modest but charming home, which still stands today.

Even my own house has somewhat of a role in the families I’m researching. One of M.H. Kulp’s nephews married a young lady whose family lived here–and of this I had no idea when I started research. In my attic, where some time ago I was removing two layers of old wallpaper, several children of the family had left their signatures and other graffiti on the walls. There was even a simple arithmetic problem written near the bottom of the stairs, and at the top someone had written the names of the nephew and his bride. One of the most interesting things I uncovered was a bit of writing that had actually been dated:

Note: You may notice the image has two different tones; I was using my cameraphone, which has poor focus, so I merged two close-up views.

And as if that weren’t incredible enough, elsewhere in the attic someone (I’ll never know exactly who, because the signature had been painted over), had written a few words which seemed reminiscent of something from a yearbook, but for me, there was a curious significance as well. The words, of all things, were:

If this you see
Remember me