It was another cold, crisp and overcast October afternoon here in Shamokin, and on October 24 this historical researcher spent it onsite and in the field. But not, as you might expect, at the modern and comfortable local library; or even the dusty shelves of the Sunbury courthouse. Instead, the past came closer than that on Friday in a bit of good old-fashioned exploring–through the (somewhat eerie) twists and turns of a century-old local landmark.

The Washington School can be seen in the background at the end of turn-of-the-century Sunbury Street. The McConnell Mansion is also visible at right.

The Washington School was built 118 years ago on Sunbury Street in Shamokin. Because of its location where the road angles southwest, its old red brick facade can be seen several blocks up the street, and is a frequent feature on many turn-of-the-century Shamokin postcards. The school itself closed many years ago and the building was later bought up in recent years by a church organization, serving for some time as a chapel or meeting place. Currently, though, it stands empty; and even the debris left behind by the churchgoers has begun to collect some considerable dust.

However, through acquaintances I was able to arrange to see the place at 3 pm today. For good measure, I came armed with both my digital camera (which can only handle 10 images at a time, but at least it has a flash), and my camera phone, arriving a few minutes early in the rear parking lot of the building.

I snapped this photo of the back of the Washington School earlier this year. Note steps down to rear doors and shrubbery on roof.

While waiting for the lady who was to show me around the place, I walked around the parking lot and took a few photos. The old school, I remembered, was not just a very interesting building (though that it was!), but also distantly connected with my own research. A genealogist I met a few months ago at the Trinity Episcopal Church currently owns some of the old records of the school, and she informed me that three children of Chester Kulp (a brother of the prominent Shamokin entrepreneur, Monroe H., who I am researching), were enrolled there in 1904-1905. And, before the school was built in 1890, that same property was the site of the Central School–which, because of its proximity to the old Kulp family homestead, may have been attended by a young Monroe Kulp in the late 1860’s and early 70’s.

Standing at the steps downward, I glanced over the gray paint and broken glass, and wondered if that old iron gate might be the same a young Monroe would have walked along in the days when the old Central School was here.

Once I got through these doors into the building, I was at first a little disappointed, being that the first things I saw were signs of modern-day remodeling–15 or 20-year-old ghastly blue carpeting; white paint; no woodwork; and, if I recall correctly, a dropped ceiling. The hallway’s atmosphere was close and dusty, and there was debris strewn about, including a long piece of filthy plywood. Picking my way around the mess, I was led down the corridor into–thank goodness–a much more open room.

It was high-ceilinged, octagonal I think, and served as a portal into the most-used first floor rooms. White paint and blue carpeting still prevailed here, but at least some signs of the old woodwork were beginning to appear. 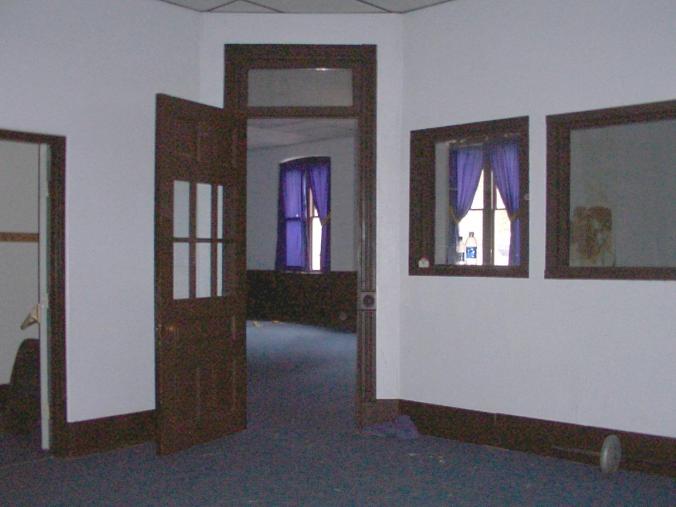 The center room of the first floor; showing door to large room. At left edge of photo is doorway of corridor from which I entered. I snapped this photo with the flash on; it was actually quite dim.

Entering the large room you see in the photo above, I found it to be quite spacious indeed–stretching about sixty feet in length. Violet curtains–apparently hung recently by the current owner, since they showed no signs of fading–were drawn back from the tall windows, and from windowsill to blue carpeting the walls were covered in magnificent dark wainscoating. Mostly, the room was empty, though some traces of the church organization could be found here and there–an organ stood against one wall, and nearby gold-colored lettering was hung just below the ceiling to spell out, simply, “Jesus.” However, the odd presence I noted of a large hot tub in the middle of the room was, I gathered, probably not due to the church activities. 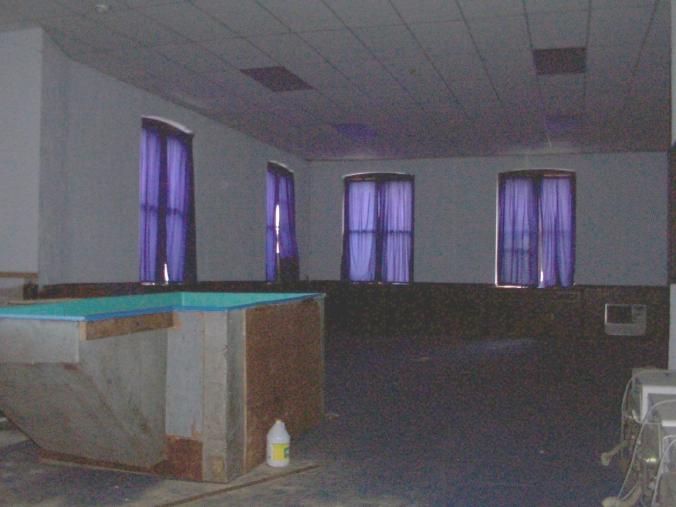 My (rather poor) cell phone photo of the Beginner room on the first floor.

Leaving the room, we headed out through the center area into a schoolroom with a sign reading “Beginner,” next to the “Primary” room. This area apparently dated from when the building housed a preschool–at what time that was I’m not certain–and the walls here were painted a very preschool-like bright yellow.

Soon, we headed upstairs, taking the back staircase–and that’s where things started to get really interesting.

The second and third floors were very similar, but though the damage and debris were extensive, the schoolrooms still had a classic turn-of-the-century aura about them. 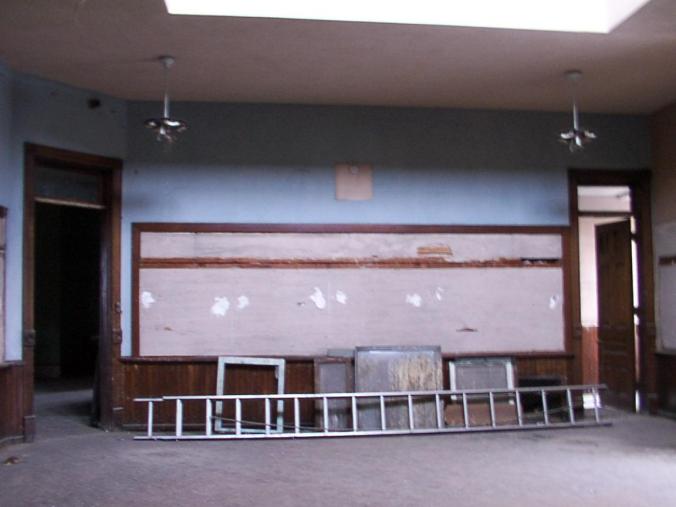 One of my favorite photos from the Washington School. In this room, it's not difficult to envision the old school desks, the students, matronly teacher, and cursive handwriting on the now missing chalkboard.

Did school friends pass through this narrow hall once, and stop to chat between classes?

As on the main floor, each floor above had a center room which led off into the schoolrooms and stairwells. The center areas and hallways were shadowy, but the classrooms were usually fairly well-lit by large windows, and, on the third floor, by skylights. Narrow corridors wound about the rooms, one lined with a long wooden bench.

View of Shamokin from a window in the school, looking approx. west toward the Trinity Lutheran Church.

I wonder whose desk this once was...?

One room–on the second floor I believe–held nothing but a pile of rubble against one wall, another of sawdust, and a lone desk and chair standing in a corner.

In a rather Winchester-like fashion, both second and third levels included doors which may once have led to balconies–but now to absolutely nothing. On the third floor, this door to nowhere was nestled in an alcove at the back of the building, near a set of secretarial privacy glass windows overlooking the stairwell. Here, too, were the remains of a non-original bathroom that had been squeezed under the rafters. Now, only pieces of plumbing and the frame of a partition were left.

Steer clear of this third floor exit--there's no balcony.

When we were upstairs (I believe it was the third floor, but I’m not certain), all three of us–my mom, myself, and our guide–heard something that sounded like slow, deliberate, and very audible footsteps on the stairs below us. We determined that none of us had caused the sound, but we definitely heard it. I did remember that just as we had entered the school by the back door earlier, someone drove up into the parking lot just behind us, in a car that was the same make and model as mine. So, hearing the noise on the stairs, I presumed that they had found their way inside and were coming upstairs. But, instead of looking for them, we waited to see if they would come up and in the meantime continued our exploring. No one showed up, however, and by the time we went downstairs–well, maybe whoever it was found their way outside again, I don’t know–but there wasn’t anyone in the building.

A dark photo--but the room was actually even darker; I took the photo with my camera's flash on to see what was inside.

Next, we proceeded to the basement. One of the two main stairwells led down to nothing but an unfinished wall and exposed insulation over it that someone had put up, but we had better luck on the other side. Using only the backlight of my cell phone for illumination–didn’t bring a flashlight, if you can believe it–we made our way downstairs and into a very dark winding passageway in the basement. The stone walls were laced with cobwebs, and the white paint was chipped in large spots. One of the rooms was so completely pitch black inside that I took a photo with my camera’s flash simply to see what was there.

One of the few rooms in the basement where you could actually see ahead of you was what appeared to be a former meeting area of some sort for the church organization. Musty and strewn with various debris including toys and books, it was dimly lit by a few windows on one wall. Also in the area were the restrooms–including a shrimp pink ladies’ room decorated with imitation vines and flowers.

Some time later, we left the building by the same back door. This old school, I had learned, was decidedly rundown and in need of work–but one thing it would never be lacking in was character. More than anything else, history was evident in its halls, and the days of old still seem to linger; in the classrooms, under the rafters, and up and down the twin stairwells.

As we left, the lady who showed me around the place could only remark–quite aptly I thought:

4 thoughts on “An Abandoned School, 2 Cameras and a Determined Researcher”