In 2008, I explored and blogged about three old Shamokin landmark buildings–the 1890 Washington School, the Douty Building, and a Commerce Street F&S Brewery building. Last week, I embarked on my fourth such expedition–a tour of the parish office of Mother Cabrini Church, formerly St. Edward’s, on Shamokin Street. It’s the building that once housed the priests of one of Shamokin’s largest Catholic parishes–a structure with an intriguing history, a somewhat uncertain architectural past, and not without a connection to my own research. But in fact, the whole matter started months earlier with a photograph–an 1870s view of Shamokin, the exact location of which was unidentified.

In Search of Old Shamokin…140 Years Ago

It looks ordinary enough, but it proved to be a real mystery. I tried and failed numerous times to identify the approximate location it shows, and I’m usually familiar with the main sections of Shamokin. The only two distinctive buildings in the photo are the church at the lower left, and the large building just to the right of it. I could not, however, identify either structure.

So I–and some family members–started considering and rejecting a number of theories as to the possible location–Springfield, Market Street, Shamokin Street. It took us forever but we finally struck on the solution when it occurred to us that the residential building in the photo might be the parish office of Mother Cabrini Church, formerly St. Edward’s.

Of course, there was a problem–the office is directly adjacent to the church, but the latter does not appear in the photo, meaning that for some reason the office (rectory at the time) had to predate the church’s construction in 1873.

However, an old letter I’ve had for some time seemed to hold an explanation. 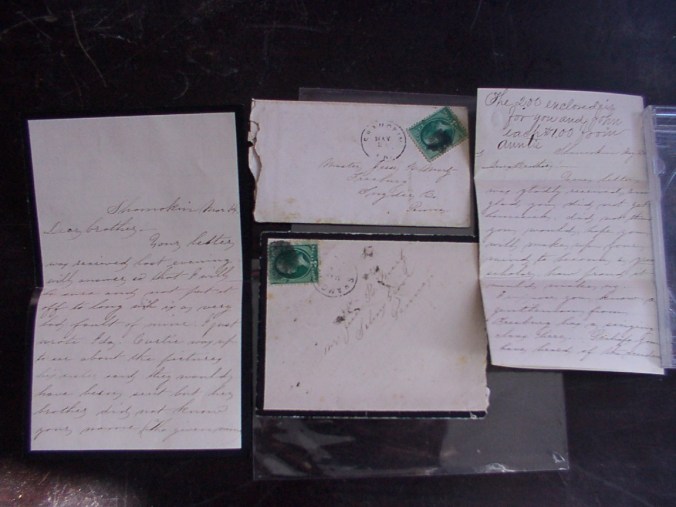 Above are two 1873 letters from one Sophronia Martz to her brother, Jesse. Sophronia was a relation of Catherine “Aunt Kitty” Martz, and resided with her in the house on Sunbury Street later designated the McConnell Mansion. In one letter, she makes reference to the laying of the cornerstone of St. Edward’s Church, and the unfortunate accident which accompanied it–the only clue, in fact, to determining the date of the letter:

“Perhaps you have heard of the accident that occurd here last week when they were going to lay the corner stone of the Catholic church, they had a platform erected which gave way and left quite a number of persons down into the basement … some few were hurt very badly, the church is to be in front of the old one.”

While area histories make reference to an older St. Edward’s Church being located in the vicinity of the current Cameron Bridge area, Sophronia’s letter would seem to indicate another structure was in use shortly before 1873. The description of it being located behind the later church also fits with the photograph, if we are to assume the residential building was indeed the rectory, and current parish office. I drove there and had a closer look at the exterior of this building, and from all appearances it did seem very likely to be one and the same with the structure in the photo.

But what exactly is the history of the parish office–and St. Edward’s parish itself?

History of a Parish

The most well-known name associated with the early history of St. Edward’s is that of Rev. John Joseph Koch. Herbert C. Bell, in his 1891 History of Northumberland County, writes that he was pastor of a Shamokin parish since 1866. Known as a beloved and, in Bell’s words, “universally respected” figure, he was said to be of “unbounded enterprise and commendable public spirit,” and he remained with St. Edward’s for more than half a century, until his passing in the early 1920s.

In such a space of time he also must have become well acquainted with a wide array of Shamokin’s citizens. One such acquaintance was said to be  none other than one of Shamokin’s most imposing names, the famed entrepreneur of endless connections in local society, Monroe H. Kulp.  Paul T. MacElwee in his 1986 News-Item story on Kulp calls him a friend of the Rev. Koch, although Kulp himself was not Catholic, and relates an anecdote of a conversation they supposedly had on the subject of Kulp’s Edgewood project.

Census records provide some insight into the names connected with the church’s history during Koch’s era. In 1870 one Daniel Risley also served the church as priest, and was in residence at what presumably was the Shamokin Street rectory. A nearby building was the home of John Flanigan, sexton. In 1900 two priests in addition to Koch occupied the parochial residence, one of them a John C. Thompson; in 1910 an Edward O’Flynn was listed as an assistant.

Koch’s biography in Bell’s History of Northumberland County claims that the parochial residence was built in 1869. It served as the church’s rectory up until recent decades.

Originally built as an Italianate, the building was later remodeled, probably at the end of the 19th Century or early in the 20th, in a classical style.

Comparison with the earlier sketch indicates that during the remodeling, the building was extended, adding a wing on the north side. A look at the interior seemed to confirm this. The two sides of the large basement show differences in construction, and floors of the north wing are built slightly lower than those of the adjoining rooms. Originally, the main staircase ran along an exterior wall.

In the spacious third floor, an imperfection in the wall indicates the original roof line. The rooms on the north side are to the right. 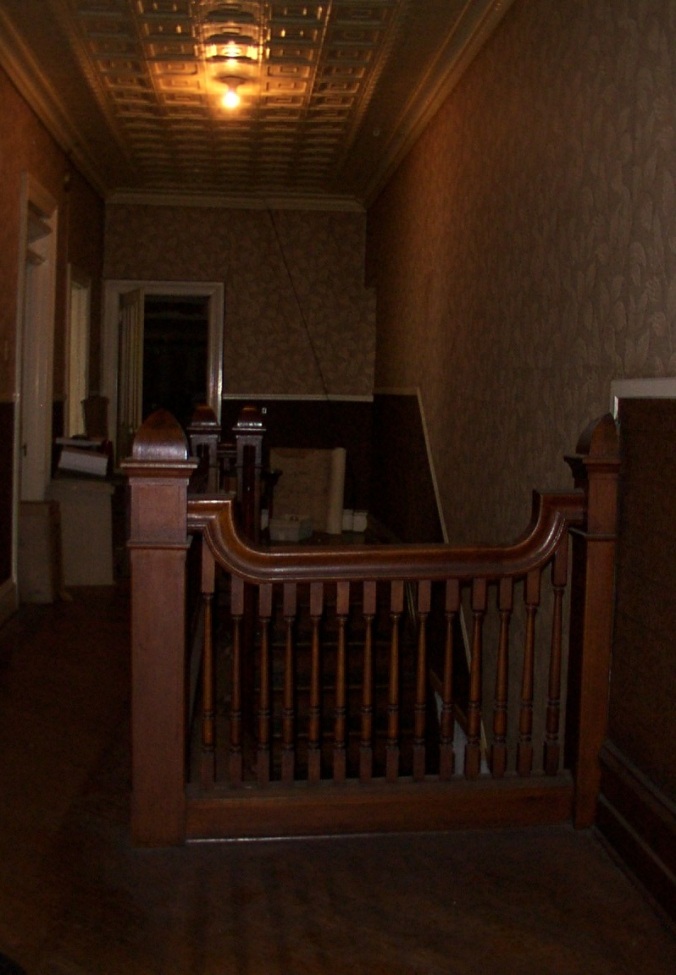 Another view of the third floor

Rear of the parish office, looking approximately east. The roof line of the west wing of the building (containing porch) does not meet up with that of the main building. While both are original sections of the structure, the lack of alignment is also evident in the 1870s bird's eye photo, confirming the identity of the building.

Downtown Shamokin, as seen from Shamokin Cemetery. Note Mother Cabrini Church just left of center. This would seem to have been approximately the same location from which the 1870s photo of the two ladies overlooking the town. 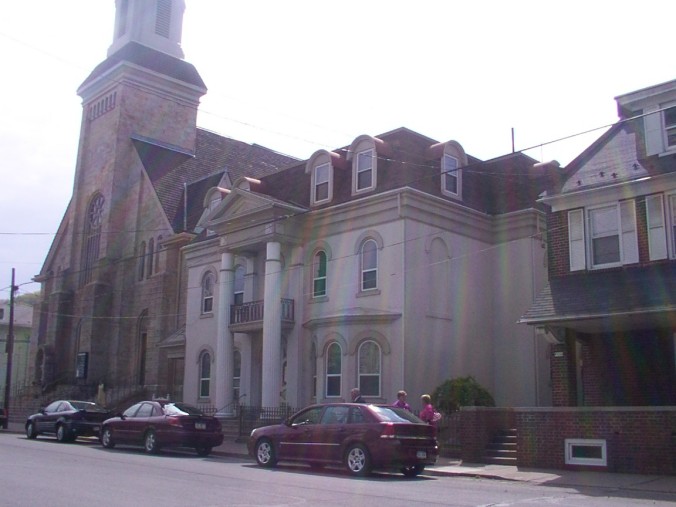