A busy schedule may have kept me absent from this blog for a while, but I just had to check in to post this rare glimpse into the coal region of old. What were Shamokinites and natives of the surrounding area doing in 1929? Many, it seems, turned out for the celebration at Richardson Field (presently Northumberland County Airport) given on the occasion of the dedication of two new hangars, as well as the retirement from the Navy of Captain Holden Chester Richardson, a native of Shamokin.

A good friend of mine recently discovered an old film reel from this event, which she purchased and converted to digital. She let me view this historical find, a copy of which she is currently offering via eBay auction, and allowed me to take a few snapshots of some of the area residents shown on the film. The following individuals are unidentified, but while I don’t know them, I wish I did! Do you recognize anyone? 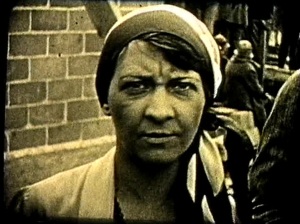 Shamokin Cemetery: The large mausoleum is visible in the background

By many, a cemetery is considered an eerie, morbid, sometimes even macabre place. It’s an overused setting in films and novels of the horror variety, and is not very often associated with anything other than death or desolation in some form. But, although a cemetery certainly marks some of the more despondent moments of history, it is also, to the people who made the Shamokin Cemetery tour on Saturday, May 23rd possible, a place to recognize and remember those who are buried there, and, for a few hours every year, to bring that past back to life.

END_OF_DOCUMENT_TOKEN_TO_BE_REPLACED

While horses made their way through the streets, and festival-goers milled about the vendors’ booths on Market Street yesterday, a red and white motorized trolley, a new one this year from Wellsboro, made stops at the corner every thirty minutes to take on new passengers for the historical tour through Shamokin and Edgewood.

I arranged to take the 12:00 tour, and as I got on as soon as it arrived, I was able to take a number of photos before many passengers came on.

The trolley, which seats about twenty people, had a beautiful oak interior with brass accents and round ceiling lamps, and in the back a speaker played quaint haywagon-style tunes. Tour booklets were laid out on the seats, featuring old and new photos for stops on the ride.

END_OF_DOCUMENT_TOKEN_TO_BE_REPLACED

What an incredible day.

Certainly, this was the most fruitful, exciting, informative and simply amazing of the three annual Heritage Festivals I’ve so far attended. Starting with the 10:00 cemetery tour, moving on to a trolley tour of Edgewood at 12, interviews with the cemetery tour reenactors at 1:30, and finally a visit to the Anthracite Heritage Museum and adjoining military museum at the American Legion Building around 3, I made it a point to do and see as much as possible, and I have to say I definitely accomplished a lot!

This is where I initially arrived to pick up tickets from the corner booth. I then proceeded to the Shamokin Cemetery, where I came early to meet and talk to a few people. The tour was fascinating, and I kept my ears peeled for interesting quotes which I quickly scribbled in a notebook. Along the approximately one-and-a-half-hour tour, several stops were made, with commentary by event coordinator and guide Frederick Reed on numerous individuals of the distant and recent past interred in the cemetery, while reenactors also portrayed four prominent figures. Later on I’ll post a more detailed article about the tour, along with photos and a few comments from the participants.

Although I only traveled on the trolley this year, it was pleasant to watch the buggy and wagon traversing downtown Shamokin every now and then–what was once, in the good old days, just a common sight.

Horse and buggy, as seen from the trolley

I also stopped by the American Legion Building before calling it a day. There, I visited the Heritage Museum (see my post from March for more information on the museum), and also happened to find my way into the military museum in the next room. Elegant old furniture and paintings (one is visible in the photo below) adorned the spacious room, which held mostly photographs of local area servicemen from the Spanish-American War, WWI and WWII–and thankfully, nearly every one included an identification!–but also old books, scrapbooks and clippings. Unfortunately, one of my cameras was just about at its capacity, and the other one was home in rehab (recharging) from overuse, so I was only able to take one photo. However, the Heritage Museum, and, I’m presuming, the adjoining military museum as well, will be open tomorrow, so if possible I will visit there again for additional photos. 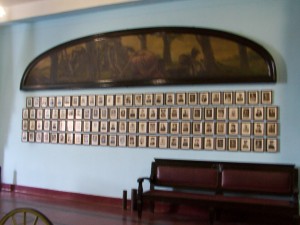 Next, I will be posting photos and information from the trolley tour, which went through Edgewood. Indeed, this was a great day, and I’m certainly glad I attended!